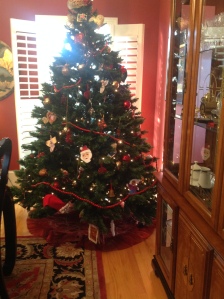 Happy Holidays!
We say that phrase often during this time of the year.

Many of us attend, with our families, churches, synagogues, mosques, and other “places of worship” during the Holiday Season. Visiting these places of worship is a good thing, I guess–if it is more than a ritual or another box to check because we have been told we are supposed to do such.

Holiday Season 2014, many of us notice an undeniable undercurrent of unrest and intolerance in America, and other places of the world. Peace and civil discourse seem to be eroding, and some citizens believe they must take to the streets to be heard, acknowledged, and understood. Whether we are watching protests marches, vitriolic political campaigns, the frenzy over Ebola, viewing violent acts around the world, or interacting with persons in our community–one thing is sure–we need the gift of understanding and tolerance in our communities, cities, in America, and in many places in the world.

Like most fundamental orientations, the gift of tolerance probably begins in the smaller units of “family worlds”–in the conversations that parents have with their children and the examples they set when interacting with people who seem to be different from them.

From my perspective, there are at least a few basic essentials needed for giving the lifelong gift of tolerance that can be taught in our family worlds:

• Expanding the family’s knowledge base about other people, their lives, opinions and ethnic origins, by viewing them from numerous and historical perspectives. Do not assume….

•Treating other individuals and families as we would like others to treat us and our families (almost all organized religions profess this ethic of reciprocity).

•Gathering facts, from different perspectives, and discussing them in our families before rushing to generalizations or judgments.

So, Happy Holidays and spread the gift of tolerance in our families this season and into 2015. Such a gift will improve the well-being of all Americans, and it will be the gift that keeps on giving!

Now, that we have survived election season and have gone directly into the Holiday Season, we can tip this time of mass marketing of purchasing to our advantage by employing the celebratory mood to give thanks to those who have helped us on our journeys–especially our parents, grandparents, and other significant family members.

If we can move pass the stresses of gifts, parties, and awkward moments with relatives, we can seize the Holiday Season as an opportunity to slow down a bit and to extend our circle of interactions to thank those who have helped us develop our values, moral compasses, and foundations that guide and gird us through our education, careers, raising families, and the time when we ourselves strive to pass on legacies.

I join many Baby-Boomers in attending one too many funerals of parents of my friends.  As I listen to those who recount the lives of these parents, it became clearer than ever that we owe so much to the generation born in the 1920s and 1930s. They were those in our families who weathered wars, economic depressions, and the unrelenting Industrial Age.  It is interesting to note that this generation is often called the “Silent Generation,” or the “Traditional Generation,” yet, their legacies speak for themselves.

Our parents and their parents worked long, hard hours, often without complaining, paid cash before credit cards became the norm, sacrificed dreams and luxuries for their children, and believed that the future would be better –if they just did their parts in small ways.

Although they were born before it was possible to take “selfies” with cell phones,  the unrelenting hopes and legacies of love that our parents and grandparents left us can be recounted in detail by some of us.  There were parents who worked two jobs to help make possible college educations for their “Baby Boomer” children.  There were parents and grandparents who were wounded in wars while fighting courageously for our rights to pursue our American Dreams.  There were uncles and aunts who passed from our lives unheralded, but who also labored for us, and guided us, in quiet, but dignified ways.

This Holiday Season, as we carve turkeys and pass around the sides, I hope we take a moment to give thanks to those who left us these foundational legacies of hope and love.  As we pay our respects to their legacies, we cannot help but thank them for believing in the possibilities of  our country, for returning to their farms to feed a nation, for bearing the indignities that only humans can inflict upon each other because of racial and class differences.  Most of all, I hope we thank them for stubbornly clinging to the belief that their sacrifices would lead to a better America for their children.

As we know,  the Silent Generation had their personal  and cultural struggles, and they gave birth to the more vocal and dramatic Baby Boomers who helped America evolve into a more diverse and future-oriented nation.  As a member of the Baby Boomers generation,  I hope that Generation X and the Millennial Generation will advance positive social action, embrace the sacrifices they will face to advance and sustain the ideals of our nation, and pay it forward to the next generations of leaders.

When you think of the “presents” we have already been given, the Holiday Season can truly be a time of celebrations!